So…? Is there a difference…? I think there is. When I make art I’m out there in my subconscious canoe, flailing around with my eyes closed when suddenly I arrive and there it is; a new painting! I have no idea where it came from or what it means. I often say, when asked what it means, “I was just there when it happened, I really know nothing about it.” 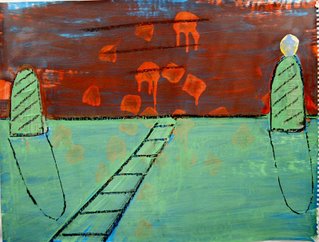 Art, like most things is just a series of tricks. Draw a line, put a dark color on one side, put a light color on the other side and voila! A landscape. That’s all there is to it. The rest of it is style and execution; make it look like you know what you’re doing. That’s about all there is to getting through life; just act like you know what you’re doing. Art is no different.

The heavy part, the part where you think you’re doing something important is sort of like the Alchemists of years ago. They would tell the kings and bishops they could turn water into wine or lead into gold. But what they were really doing was investigating how the world worked. Then there were also the con artists who could care less how the world worked, they were just trying to make a buck or a farthing or whatever. But that’s another story.

That’s what artists are doing. We tell everybody we are making pretty pictures for their entertainment but what we are really doing is trying to peek behind the curtain. We are mapping the psyche of the human mind... And among artists we also have our con artists. (Who will remain nameless but whose initials are BLEEP)

As to landscapes, I’m confident Turner, Constable and Cezanne (they all just painted fancy horizontal lines) would all feel comfortable with my landscapes. But in addition to those luminaries of the painting world I also take into account Picasso, Duchamp and Warhol. They painted lines in other dimensions.

But it’s all just tricks, fooling us into going places we wouldn’t otherwise go, leaving us with thoughts we didn’t know we could think. That’s the peeking behind the curtain part.

My Spirit Guides are Teaching me Landscape Painting. 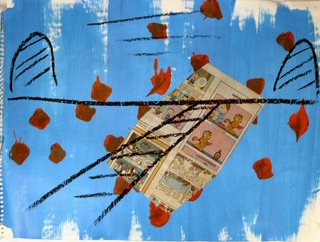 I use what I call source materials for making paintings. That is, I use an image to create another image. I have used other paintings, drawings, photographs, all kinds of things. All of the paintings on my web site are made using this technique. For a long stretch I used my own drawings from life drawing. 20 or so years ago I learned a technique for contacting my “Spirit Guides”. My spirit guides are strictly non-verbal. They use pantomime and drawings to convey their messages. Many early paintings not on my website used this method. Now I’ve resurrected this approach. The surprising thing is they are now teaching me landscape painting. In the early days they just presented isolated images out of context. But now they are presenting complete compositions complete with rendering and perspective. Many of you, who know me, know I’m virtually famous for saying “I couldn’t render my way out of a paper bag”. These new paintings (can be seen on my web site) are admittedly primitive and I’m sure many would say I haven’t made it out of the paper bag yet. But I’m having a blast and I would hope you would go check these out. And there are more to come.

Stand back everybody, I'll save the art world!

I felt I was being given a challenge by those in the *conversation* to put my toe in the post-modern pool and try it out. “Just jump in, you’ll get used to it”. There’s a quality of “little pool and big pool”, to continue with the allegory, or “in the arena or in the stands”.

Yea, its fine to just do what you want and the hell with what anybody else wants. Please understand this isn’t a criticism of anyone else. This is only a struggle I’m dealing with. In my “old” abstract work I felt a small nagging feeling there was something else going on. So small, in fact, I managed to ignore it. It wasn’t until now when I look back that I can see it. Also there was the experience of the last 30 or so years of going into galleries and museums and seeing stuff that didn’t register with me at all. And wondering “what are all these people talking about?”

Of course I don’t think I even have to say it, the main meat in the whole enchilada is the high while in the creative act. That’s like the melody (mixing metaphors with wild abandon). The harmony or counterpoint or whatever is this other thing; what’s going on? Do I have anything to contribute? And if everybody is as brainless as they appear, do I have anything to say about that? Or on the other hand should I just climb back into the stands and content myself with my own doodlings? Of course I do that from time to time but the siren call of the “action” calls and I feel drawn in.

Make no mistake; Marcel Duchamp and Andy Warhol are two of my favorite artists. They are far and away some of the best artists of the 20th century, totally ground breaking. But I didn’t see any of the work I was seeing as coming up to anywhere near that par. It was just real bad and real inarticulate. But it continued to be accepted as work on the same level as Warhol and Duchamp. Somebody is fooling themselves.

But to accept that as what’s happening and that’s the way it goes is unacceptable. There are those who will say it’s just a matter of money and politics and a bunch of power brokers manipulating the market and trying to keep the whole thing from getting away from them for there own profit and to hell with the culture. (God, that’s an evil thought!)

I prefer to think that it was a case of a bunch of marginal artists and curators trying to deal with a paradigm shift in our culture and failing. But that’s hard to accept too. That this could go on for 30 odd years and nothing come out of it? Wow! That’s really something! I just have a hard time believing this can go on for much longer.

So that’s setting the stage when Trevor comes along and says “look around you, it’s a whole new world!” So I guess when it comes down to it I think I’m going to save the art world!

God! the state of art today!

Thank God for that! I was sure I offended you and that was the last thing I was thinking of. Well maybe not the last but it was really way back there.

When are you going to set up a web site so I can see your stuff? I’m telling you, a web site is the way to go.

I think visual artists are in a similar situation as musician visa-vie the market. Up until the last 10 years or so musician were at the mercy of the recording companies. Then along came Napster and upset the apple cart. Napster has now gone legit but the gene is out of the bottle. Now musicians are in direct contact with their public. Lots of musicians have web sites of their own. Now they and their public are in direct contact with each other. And the record companies are scrambling trying to keep their shirts. I think artists are in much the same situation. Of course the music industry is much bigger then the art industry (industry?). And the galleries and museums are nowhere near the force as the record companies. But I think the model is similar. With a web site you have much greater control over whether your work gets seen or not. You don’t have to jump through a bunch of hoops to let people see your work. And you have some control over who sees your work. And through marketing techniques you can enhance all of this.

Never mind I hate almost all current music. I think this is a brand new medium and we haven’t seen its mature players yet.

The thing about Post modernism is really a trip. I think we have to come to terms with the fact we are in a new era now. Modern art is gone. Post Modernism is what’s happening now. It’s just a fact of life; things move on. Do you remember in art school we would go to all those openings and there would be all this installation / current events crap? None of it made any sense to me. But unbeknownst to us those guys were taking over the art world. They just looked like bad Duchamp / Warhol wanna-bes to me but they were the conversation. No one wants to talk about formal composition-form-color any more. Its all context and content now. Look up post-modernism on Wikipedia. It’s very interesting. Trevor convinced me that I had to change my conversation or be left behind. I don’t mean behind in the market place but in the conversation. He showed me how I could see post-modernism through the lens of my current work and make some sense of it.

Do you know how many artists there are out there? It’s like doing that calculation for how many planets with intelligent life there are. Just think how many art students there were in this country between, say 1965 and 1995, Probably millions, lets say 2 million. Of those, say 5% continue to make art after graduation. That means there are 100,000 artists out there, just in this country, who are trying to hustle their way through life. Of those, say another 5% are making a living somehow in the art world; teaching, whatever. That means there are 95,000 people out there making art and just getting by on the skin of their teeth; people like you and me. That means a whole lot of art is going down the tubes in the nest 30 years. Think landfills.

I’m going to post this on my bolg. Maybe you will want to respond there instead of e-mail. Maybe we can get a conversation going.

February 16th, 2006
Mural destroyed, vandalism suspected
Local News Briefs
A mural at Vallejo Plaza was destroyed over the weekend, one of the artists said Wednesday. Vallejo artist Peter Hubbard said he suspects vandals burned the piece, which hung outside the Fetterly Playhouse for the Arts and measured 10 feet by 15 feet. The mural, painted on a makeshift canvas of newsprint and cereal boxes, was designed to erode over time when left in the sun, rain and wind, Hubbard said. "I was just devastated," Hubbard said. But, he added, "That may sound peculiar because we knew they were going to be destroyed in the weather anyway." Hubbard said he and Trevor Burrowes have painted more than a half-dozen murals, but they will have to find a new place to hang the works. Mall management is forbidding the pair from displaying more murals for fear vandals may do more damage to the building.